Rhinoplasty is one of the most common of all plastic surgery procedures. Also called nose job, it can:

It may also correct a birth defect or injury, or help relieve some breathing problems.

First of all, those who are well adjusted and otherwise happy with their lives, and simply want to improve the nose appearance, (but do not seek perfection) observing next points.

Highly recommended to those who feel unhappy and conscious of a psychological or social distress due to a disharmonic and disproportionate nose.

Gender and age: the procedure should wait until after the teenage growth period that occurs in the mid-teens. This growth period normally occurs from ages 14 to 15 for girls and somewhat later for boys.

The surgery is also performed for those who are willing to correct birth defects or breathing problems.

Rhinoplasty is often an enhancement to facial rejuvenation, particularly in the correction of the aging nose (drooping of the tip).

First, incisions are made, separating the skin of the nose from its supporting framework of bone and cartilage. The majority of incisions are made inside the nose, where they are invisible. In some cases, an incision is made in the area of skin separating the nostrils. Next, certain amounts of underlying bone and cartilage are removed, added to, or rearranged to provide a newly shaped structure.

The skin is then redraped over the new frame and the incisions are closed. A splint is applied to the outside of the nose to help retain the new shape while the nose heals. Soft, absorbent material may be used inside the nose to maintain stability along the dividing wall of the air passages called the septum. Alternatively, soft nasal supports that permit nasal breathing post-operatively can be placed.

The recovery process starts with staying in bed with the head elevated for the first 24 hours. The face will be felt puffy, and the nose may ache, and a dull headache may be present. Pain can be managed with medication prescribed by the surgeon.

Swelling and bruising will peak after two to three days, this can be lessened with the application of cold compresses.

A little bleeding is common during the first few days following surgery, and you may continue to feel some stuffiness for several weeks. It is requested to the patient not to blow the nose for approximately one week.

As part of rhinoplasty post operation instructions, patients will also be advised not to bend over with the head below the heart as this may increase swelling and bleeding. The nasal packing will be removed after a few days, and the splint (which covers the nose after surgery) and/or stitches will be removed one to two weeks later.

Patients are usually up within two days, and are able to return to sedentary work or school approximately one week after rhinoplasty surgery, but recovery may take longer if post operation instructions are not followed.

Patients should not participate in sports or return to weight lifting for two weeks after rhinoplasty and should not take part in any activity that may result in a blow to the nose for about eight weeks.

What are the possible side-effects and complications of a nose job?

The practice of medicine and surgery is not an exact science. Although this operation doesn't have practically any type of side-effects some of the risks and potential complications that can occur are infection, fluid accumulation, changes in skin sensation, rupture of small surface vessels of the nose, skin discoloration and/or swelling, etc. 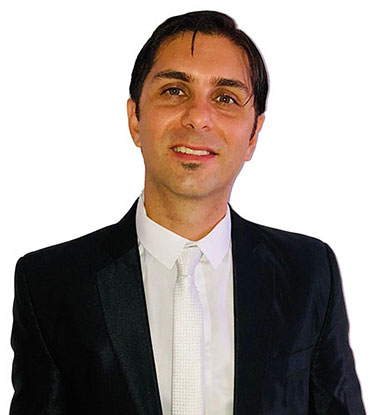 Before and After Photos

Check out our rhinoplasty before & after photo gallery. Here you can view actual patient before and after pictures from plastic surgeons in Argentina. These photographs represent typical results, but we cannot guarantee the exact same result as the images below, since it varies depending on the patient. 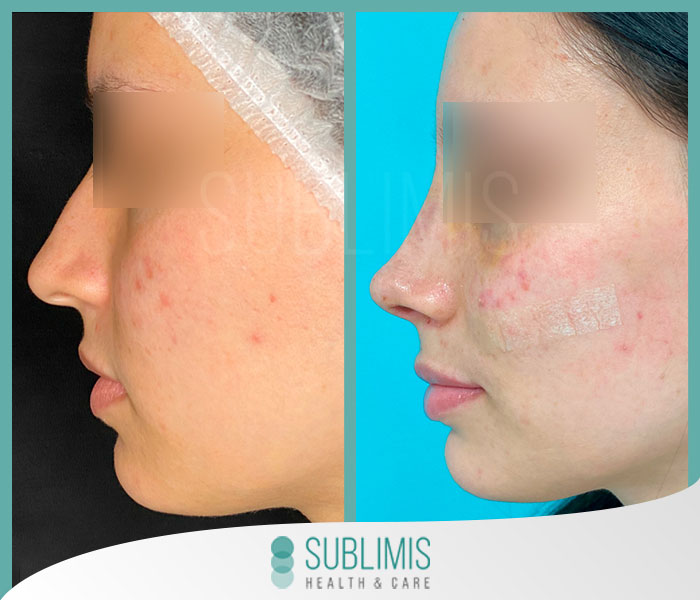 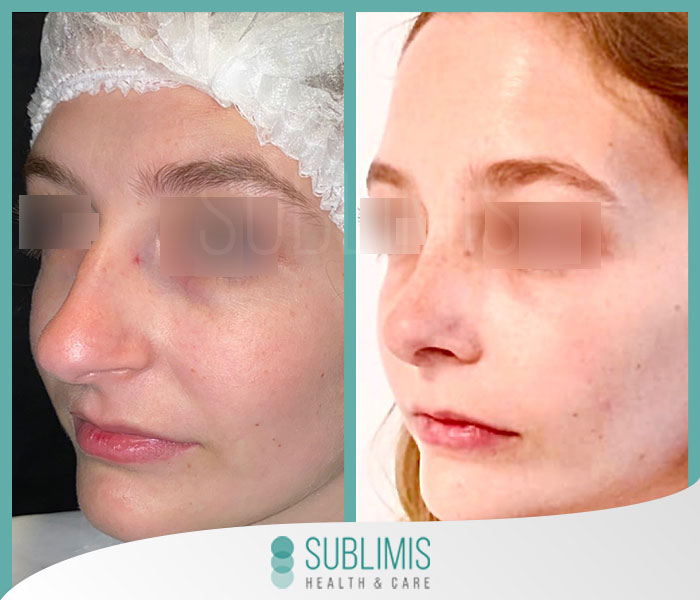 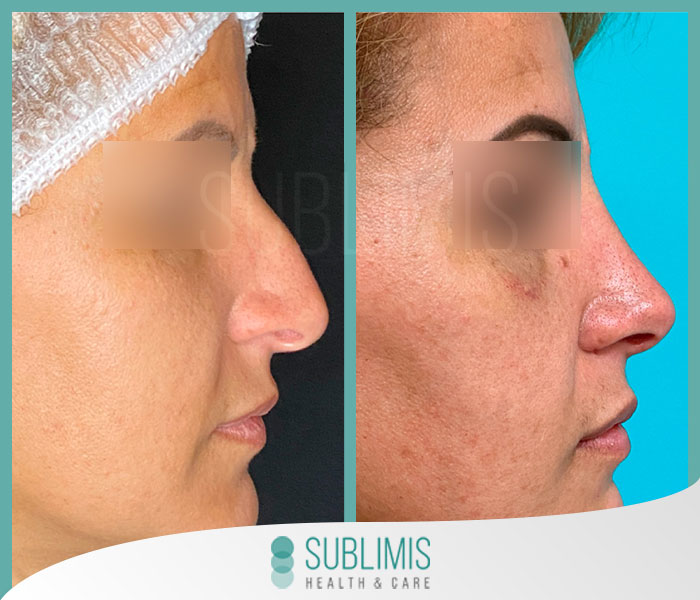 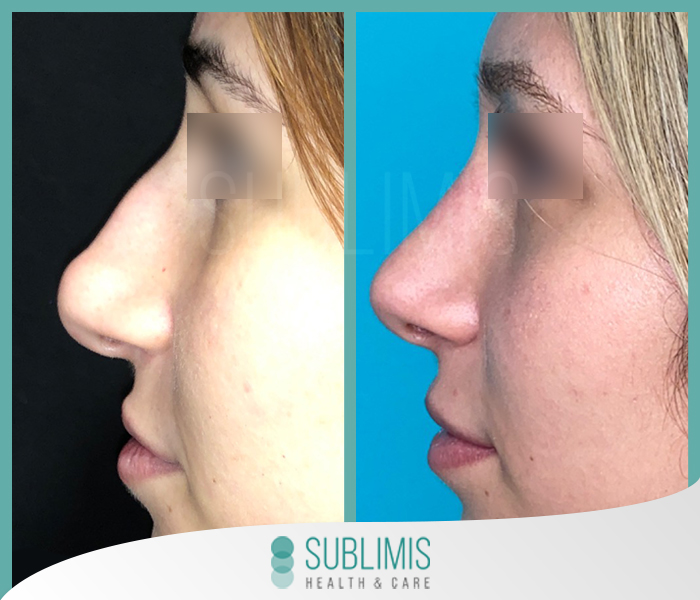 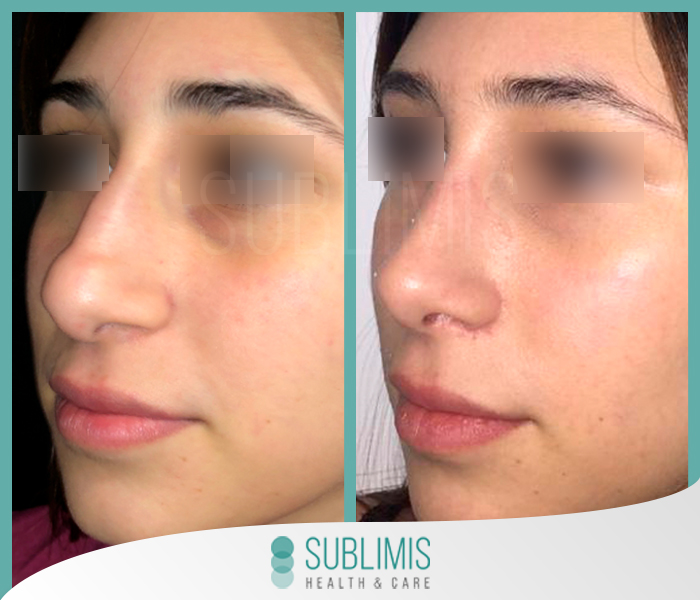 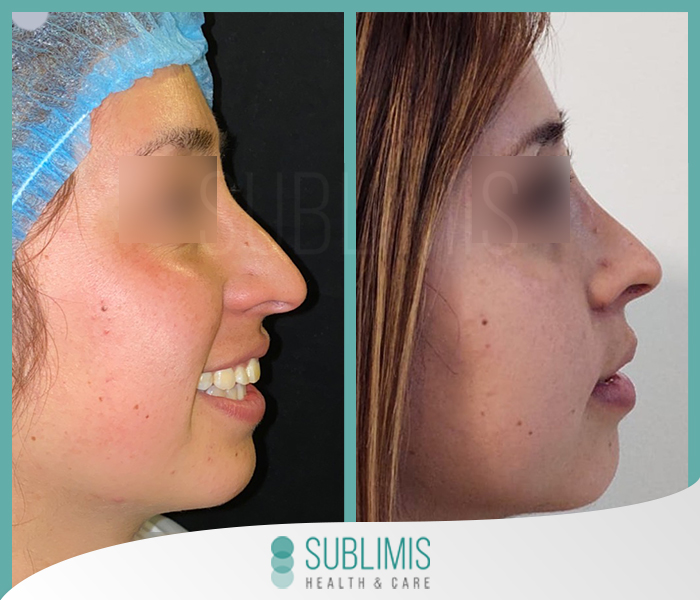 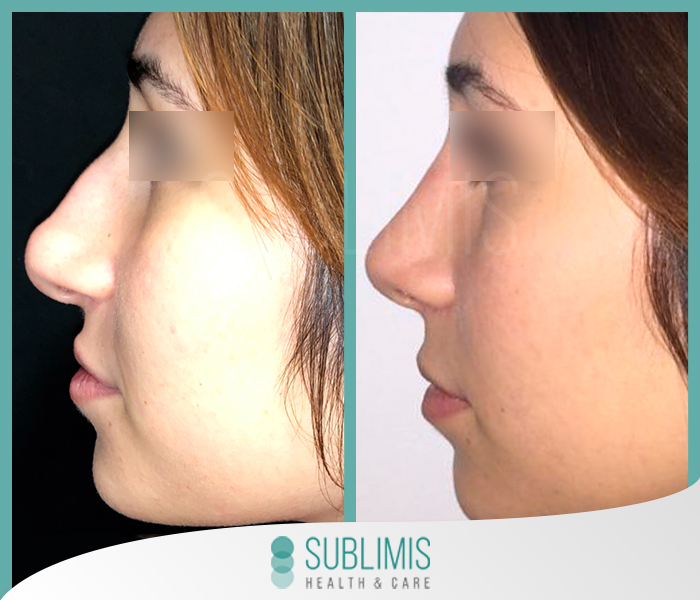 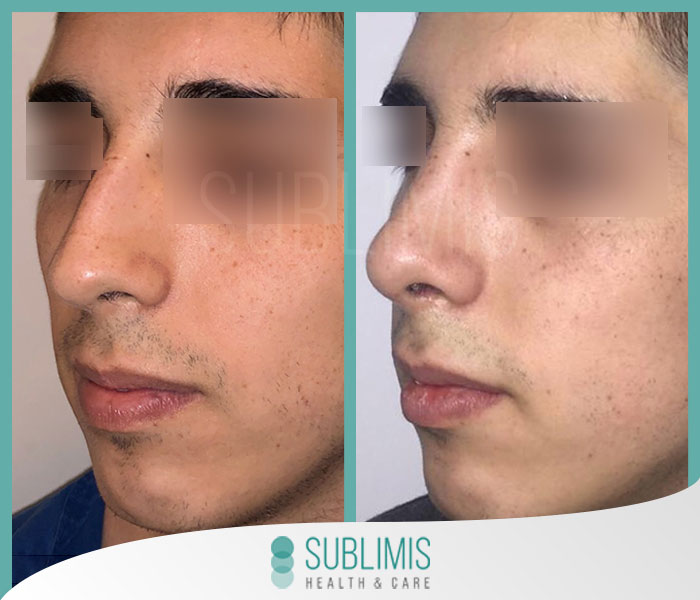 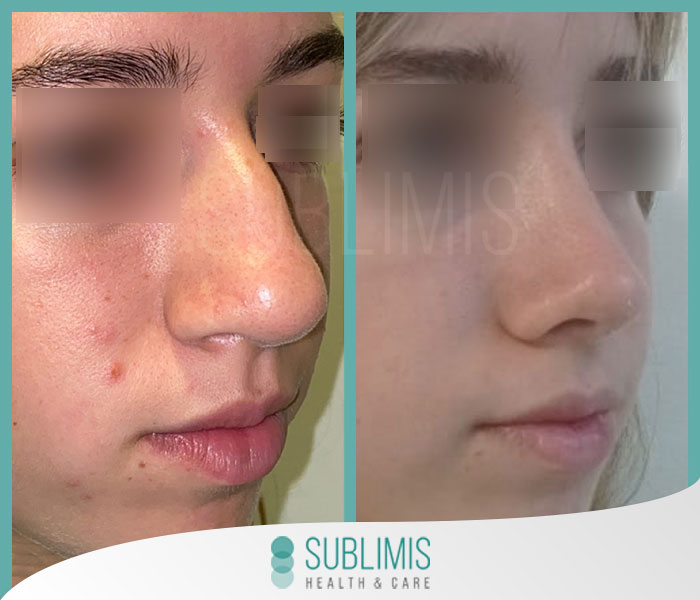 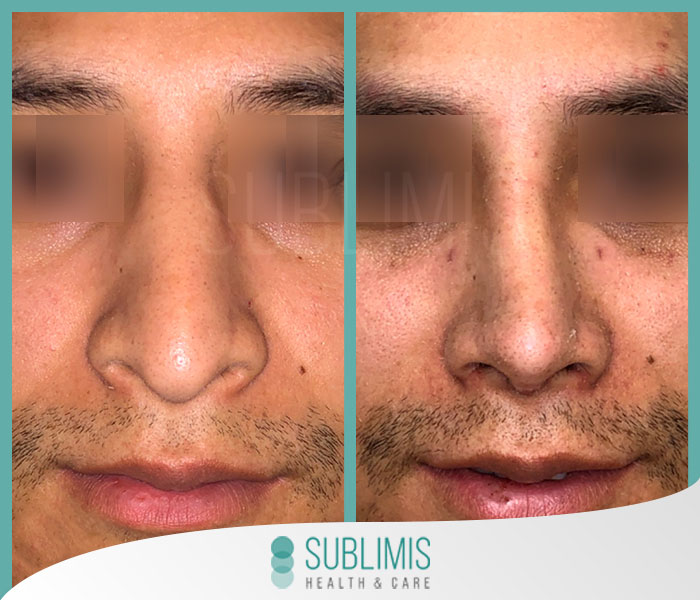 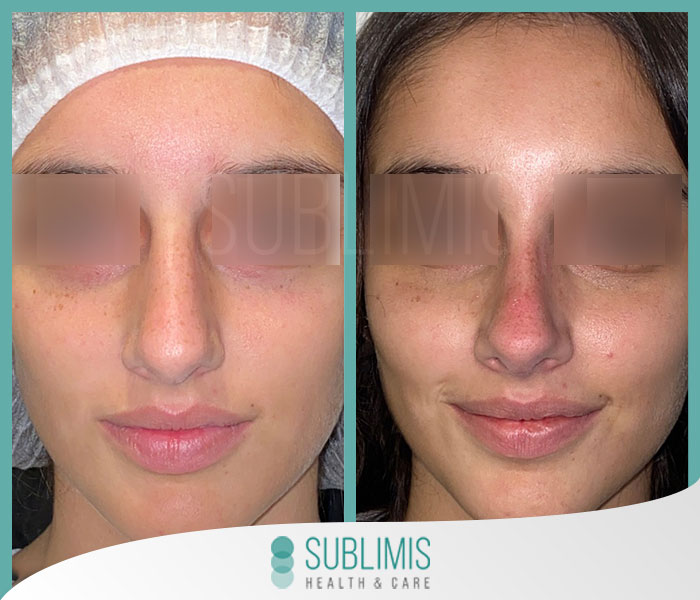 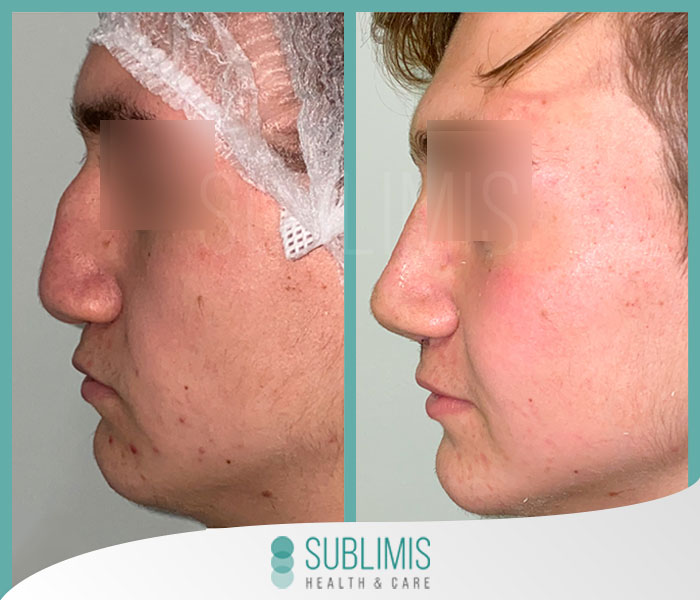 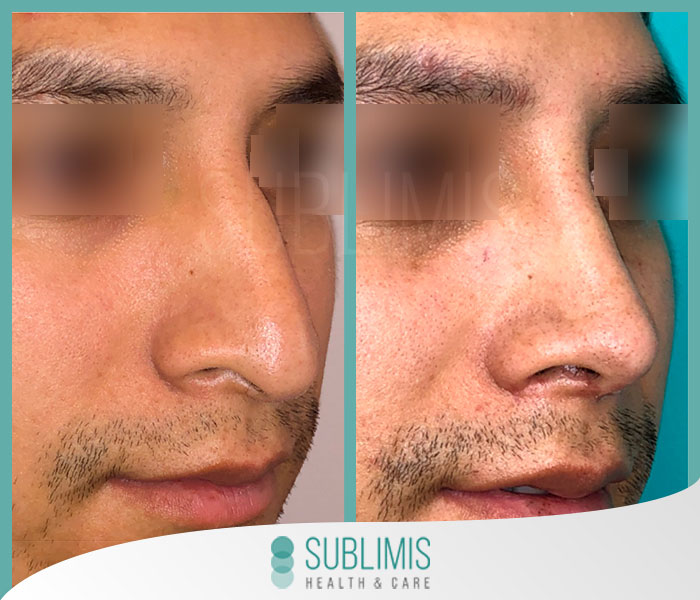 How much does a rhinoplasty cost abroad? The reference price for a nose job surgery in Argentina is USD 1,200 but this may vary according to the needs and requirements of each patient. Please fill in the form below to contact us and get your free quote!

We meet all the biosecurity measures in the health industry during the Covid-19 pandemic. To be able to perform the surgery you must have a negative test result for coronavirus.

Written by Hugo Luciano Monjo, M.D.
Last update: 28/08/2022
Note: This information serves as support and does not replace your doctors opinion.

Eyelid surgery is a cosmetic plastic surgery that corrects sagging, or drooping eyelids as well as bags and bulges around the eyes.

The forehead lift or brow lift objective is to restore a more youthful, refreshed look to the area above the eyes.

The cheek surgery is an operation which changes the basic shape and balance of the patient face via shaped implants applied to build up cheekbones, or reshape the jaw line

Chin surgery can reduce (mentoplasty) or augment (genioplasty) the chin to give your face a more balanced appearance.

The main objective of otoplasty or ear surgery is to modify the size and shape of your ears in order to give them a more pleasant look.

Lipo Injections, autologous fat transfer or lipofilling is a cosmetic procedure used for facial rejuvenation, buttock augmentation and it is being tested for breast augmentation.